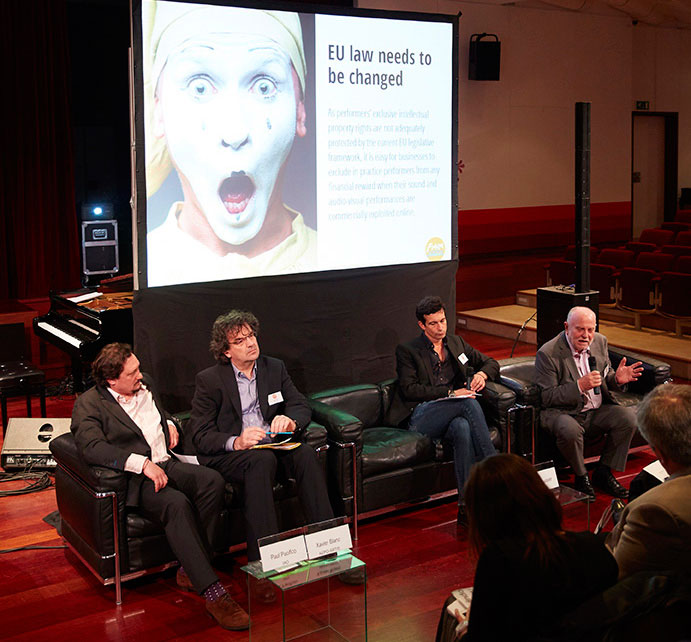 PERFORMERS UNITE TO CAMPAIGN FOR A FAIR INTERNET
Press Release | Brussels, 5 May 2015

Today, four international organisations representing more than 500,000 performers in Europe joined forces to launch a campaign for the fair treatment of all performers in the digital environment.

The ‘Fair Internet for Performers Campaign’ brings together AEPO-ARTIS, EuroFIA, FIM and IAO, who represent musicians, singers, actors and dancers, all united in their call to the European legislator to ‘make the Internet a fair environment for performers’.

Nick Mason of British band Pink Floyd said: “No more time must be wasted. The European Commission is currently preparing to modernise the EU copyright rules and any such effort cannot deny young people coming into our industry the chance to get properly paid for their work.”

Speaking on the eve of the release of the European Commission’s Digital Single Market Strategy, AEPO-ARTIS, EuroFIA, FIM and IAO call on the European Commission, the Parliament and the Council to take action as a matter of priority to ensure that performers get a fair share of online revenues through a new, unwaivable remuneration right for legal on demand uses of their work. This right would be collected from digital platforms that make the performances available on demand and subject to mandatory collective management.

Europe would not enjoy the vibrant cultural scene it does today and its creative content sector would simply not exist without performers. However, current legislation makes it easy for businesses to deny performers fair remuneration for the legal exploitation of their work online. All exclusive rights granted to performers under EU legislation are generally transferred to producers under contractual agreements.

Only a few, ‘featured performers’, manage to negotiate the payment of mostly very low royalties for the exploitation of their performances.

The vast majority of performers receive no remuneration at all, or, at best, a derisory single all-inclusive fee.

EU legislation which aims to protect performers also in the digital environment has therefore failed. The European legislator must ensure that its on-going reform process addresses this situation and creates a sustainable cultural and creative industry where performers are remunerated for the online exploitation of their performances.

Spanish actor Javier Bardem said: “An unbalanced industry, whose workers are not adequately protected, will fail sooner or later. What we ask is to be able to participate in the economic results of the works […] We, the actors, are the most interested in the audiovisual works reaching the broadest possible diffusion and economic results”.

Fran Healy of UK band Travis stated: “The opportunity to make streaming payments equitable for the artists who record and perform the songs we all love is one giant step towards a savvier, more sustainable music industry”.

Nacho Garcia Vega of Spanish band Nacha Pop stated: “Performers all over the world start to be tired of this unfair situation. It cannot last much longer”.

© 2015 Fair Internet for Performers | Disclaimer | Privacy policy
Share This
MENU
We use cookies to ensure that we give you the best experience on our website. If you continue without changing your settings, we will assume that you are happy with it.OkRead more